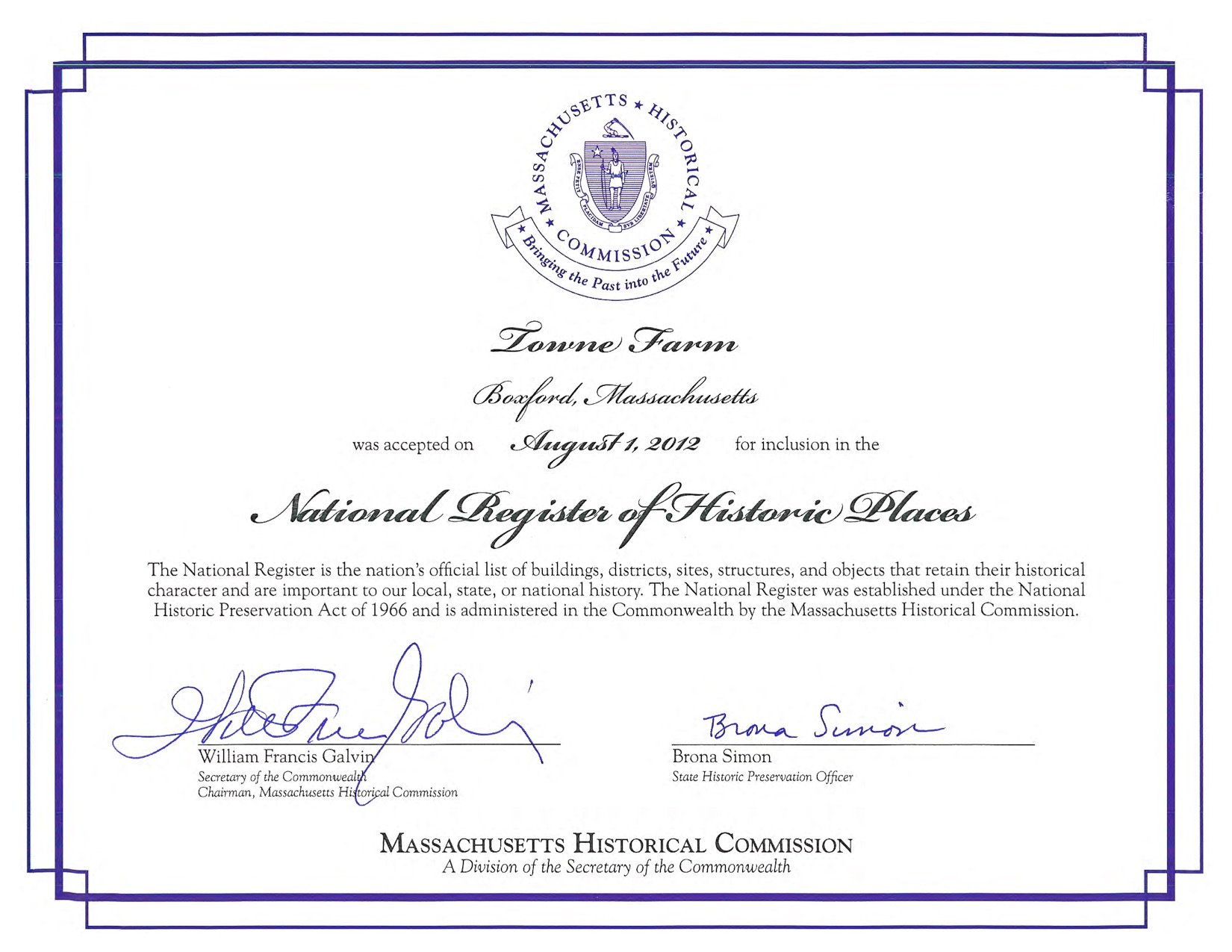 On August 1, 2012, the Massachusetts Historical Commission accepted ifarm LLC for inclusion in the National Register of Historic Places on the basis its historical significance to the town of Boxford and because it is one of the last, intact Federal era farmsteads in Essex County. The National Register is the nation’s official list of buildings, districts, sites, structures and objects that retain their historical character and are important to our local, state, or national history. The following history of the farm and its structures is derived from research conducted by Christine Beard, Principal, Tremont Preservation Services, Ipswich, MA.

Originally known as Towne Farm, ifarm is significant for its associations with Boxford’s agricultural history and with the Towne family who owned the property for more than 150 years (1777-1934). In 1777 when John Towne made the first purchase of land that would eventually make up the family farm, Boxford was a small rural community with a population of only about 990 individuals. The vast majority of Boxford residents were engaged in agricultural pursuits in the late 18th century; this continued to be the case into the early 20th century. John Towne’s initial purchase of 1777 included “one half of a certain tract of land with one half of the buildings thereon” from his brother-in-law Elijah Dwinell.

Towne moved into an existing older house on the property and lived there until 1790 when his son Asa, a carpenter, constructed the existing Federal style house for his father and the older house was removed. It is interesting to note that, like many New England farmers, John Towne apparently supplemented his income by making shoes, a trade that would also be taken up by his son and grandson. John Towne died in 1830, leaving his farm to his son Samuel. Samuel sold the farm with “about seventy five acres” to his son Henry A. Towne in 1845. Henry Towne purchased additional land adjacent to the farm, increasing the size of the property to 95 acres by 1886, at which time he sold the property to his youngest son Hiram N. Towne.

Hiram was the first in three generations to diverge from farming as his principal source of income. He instead entered the lumbering business and became a very successful wholesaler of lumber and wood. By 1865 the cutting of wood products had become a fairly significant industry in Boxford. Hiram was responsible for significantly increasing the size of the family farm by buying up a number of adjacent parcels of land between 1885 and 1928. At the time of Hiram’s death in 1932, the farm property contained nearly 220 acres of land. In addition, Hiram purchased numerous large tracts to support his lumber business, most in Boxford but also in the nearby towns of North Andover, Andover, Rowley and Middleton. Although Hiram’s principal focus was in the lumber industry, he continued to maintain an active farm, and in fact he increased the amount of livestock.  It appears that Hiram’s brother-in-law Robert Parkhurst (husband of Hiram’s sister Lucy) was largely responsible for the poultry business at the farm. Parkhurst was also a member of the Essex County Poultry Association and winner of several top prizes in the Topsfield Fair’s poultry division in the early 20th century. Parkhurst and his family lived in a cottage on the farm from about 1911 until about 1934. Hiram N. Towne died in February of 1932 and his wife Alice passed away shortly thereafter. Having no children of his own, the remainder of Hiram’s property was inherited by his brother-in-law, Robert B. Parkhurst, and his nieces and nephews. John Parkhurst, a current Boxford resident, is the grandson of the Robert Parkhurst.

The farm complex, along with about 218 acres of land, was sold out of the family to John P. Hughes in 1934. This not only marks the end of the Towne family association with the property but it also appears that the property no longer served as an active income-producing farm after the sale to Hughes. The farm continued to change hands through the years. In 1962, it was sold to a group of investors that included Richard Wills, son and successor to well-known architect Royal Barry Wills. At the time there was only one other house along Towne Road east of the farm. A portion of the property, including the buildings and 8.4 acres of land was immediately resold to Richard & Jean Price. The investors retained 106 acres on the south side of Towne Road until 1971, when they also sold it to the Prices with an interesting stipulation that no buildings could be constructed on the 106 acre parcel until September 20, 1992, unless they were designed by Royal Barry Wills Associates, Inc. As it turned out, development did not occur on this parcel; instead, about 89 acres were sold to the Essex County Greenbelt in 2001 and preserved as conservation land. In 2009, the Prices’ sold the farm, with the buildings and approximately 17 acres of land to Christine Barensfeld.

ifarm is comprised of several historic structures including  the farmhouse, an adjacent carriage house, a large barn, a garage, a windmill and associated pump house, a water tower, a stone well enclosure, and a number of stone walls.

The Federal style farmhouse was built in 1790. The main block follows the double-pile, central-chimney plan that served as the most common house type in New England between 1760 and 1830. The main entry appears to be original to the house and throughout the house, particularly in the front rooms, one finds many features from the original 1790 construction including wide wood flooring, pine beam casings and four-panel doors. The ell that connects the main house to the carriage house was formerly a mid-19th century shoemakers shop.

The Carriage House (1858) was a free-standing structure throughout most of its history but today is connected to the main house by a narrow addition. While the building has been altered significantly, the frame and structure of the original building remain. The existing barn (late 18th century/late 19th century) actually encompasses the original barn on the property, which was an English tie beam barn measuring 40’x20’. The hand-hewn frame of the original barn remains visible within the existing structure. The original hand-hewn timbers at the south end of the barn are clearly distinguishable from the later sawn timbers at the rear. The exact date of the garage’s construction is not known but it appears that it was built in several phases in the late 19th and early 20th centuries, likely first serving as a shed and later enlarged and converted to hold vehicles. According to family notes, Hiram Towne acquired his first automobile in 1912 so the garage may have been constructed about that time. The pump house (1902) is a small rectangular structure rising from a rough field stone foundation and enclosed by a gable roof. According to Bertha (Towne) Crosby (niece of Hiram Towne), the pump house was originally an ell of a nearby house and was moved to this location. There are a number of historic stone walls scattered throughout the property but most are found in the immediate vicinity of the buildings, framing the house and barn yards and lining portions of the street.

Christine purchased the property to protect it from subdivision by a residential developer. She assembled a design and construction team, consisting of Benjamin Nutter Architects, Howell Custom Building Group, and Preservation Timber Framing, with the vision of restoring the farm to its original state and recreating aspects of a 19th century farmstead. The implementation of this vision continues to be a work in progress. More recently, a permaculture has been established with the help of Landscapes by Lillabeth. When it reaches maturity, the plants will provide enough edible produce to sustain a several families and more.