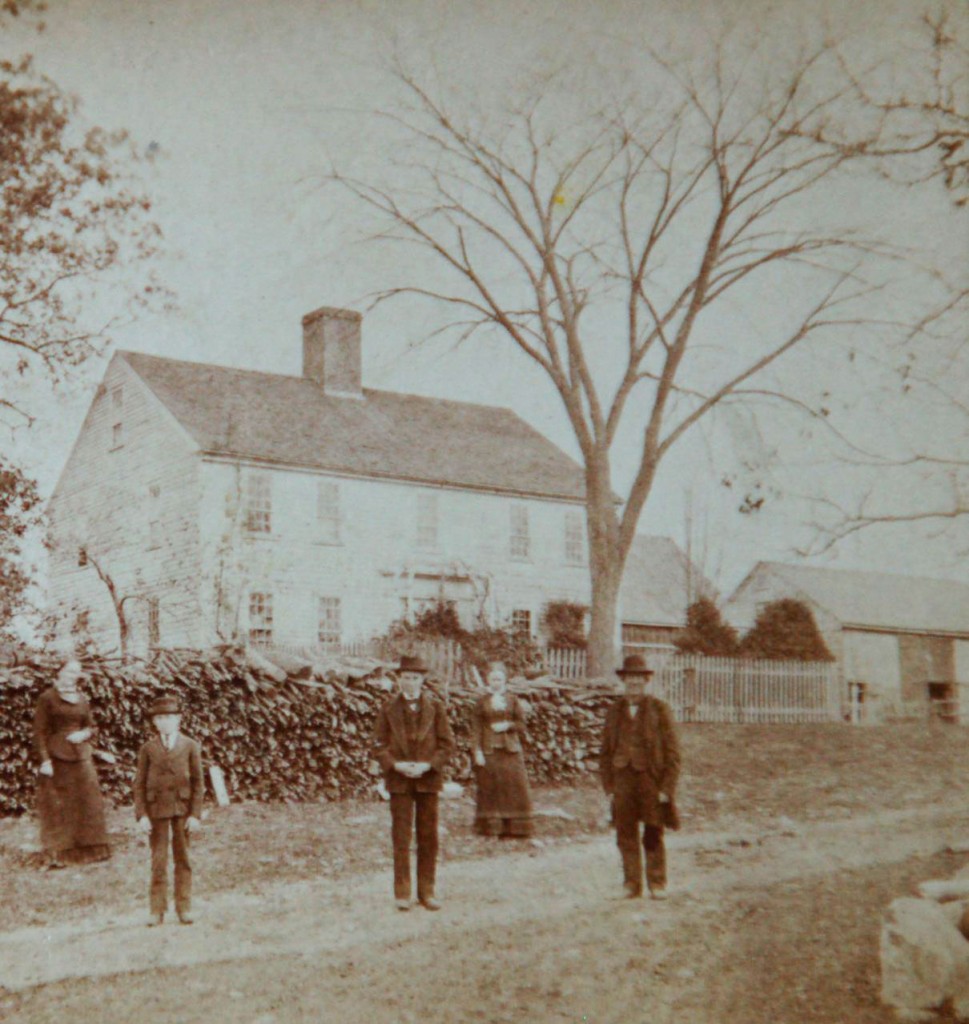 History lives and breathes at ifarm. The buildings and grounds of our restored 19th century farm reflect the agricultural and economic trends of New England over several centuries.

The Pawtuckets of Agawam, The Original Permaculturists of Essex County

It is important to note that human history, for America and for ifarm, did not begin with European settlers but with Native Americans. At the time English settlers arrived, the Pawtuckets of Agawam were the resident tribe of Essex County. The Pawtuckets of Agawam were true permaculturists, who had developed farming practices over centuries to perfectly fit the New England climate.

They burned fields to fertilize the ground and cultivated a trio of companion plants called the Three Sisters. This trio included corn as the staple crop, beans to fix nitrogen in the soil, and squash or pumpkins to provide ground cover. These crops worked so well together that they could be planted for many years without depleting the soil.

European disease and warfare destroyed most of the Pawtuckets of Agawam by the end of the 17th century. The New England tribes built with biodegradable materials like wood and grass and left little trace of their occupation here. 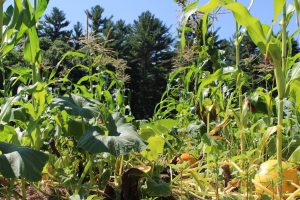 The Founding of Towne Farm

In 1777, America was in immense upheaval and just beginning to define its character as a nation. International markets were flush with possibility, giving immigrants (particularly white male immigrants) the opportunity to carve a place for themselves in the world. It was the beginning of the American Dream. John Towne seized this opportunity, and with it, the means for the Towne family to prosper for the next 150 years (1777-1934.) 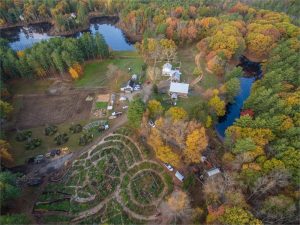 A bird’s eye view of ifarm LLC today, with the restored buildings and permaculture garden.

At this time, Boxford was a small rural community with a population of about 990 individuals. Most Boxford residents were family farmers engaged in agricultural pursuits. Land was plentiful: Most family farms comprised around sixty acres, with a few acres of farmland, up to twenty acres of pastureland, and the rest left undeveloped for lumber.

Early American settlers were not well adapted to farming in New England. Their foreign farming styles often depleted the land and the soil. By the time John Towne purchased the Towne Farm land in 1777, farming communities were taking serious strides to adapt their methods. Agricultural towns like Boxford became tight knit communities that worked together to trade valuable skills, purchase communal oxen teams, and raise barns. They dedicated themselves to crop rotation and raising livestock to increase soil fertility.

Towne Farm Through the Centuries

Upon founding Towne Farm in 1777, John Towne moved into an existing older house on the property. He lived there until 1790 when his son Asa, a carpenter, constructed the existing Federal style house for his father. Like many New England farmers, John Towne supplemented his income by making shoes, which could be sold or traded for other useful skills like blacksmithing, cabinet-making, or basket weaving.

Over the next century, the farm, its land, and the valuable shoemaking trade passed to John’s son Samuel Towne and grandson Henry A. Towne. It was an eventful period that included the Louis and Clark expeditions, the rise and fall of Napoleon, Beethoven’s symphonies, Charles Darwin’s Origin of Species, and Jane Austen’s novels. In the midst of America’s growing international power, the Towne family also prospered, expanding the farm to 95 acres and building the carriage house (1858) and barn (late 18th/early 19th century) that still stand on the property today. 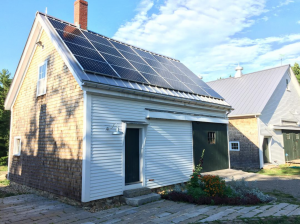 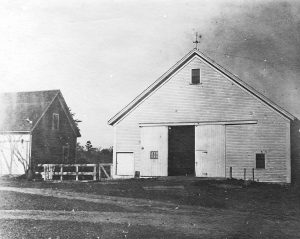 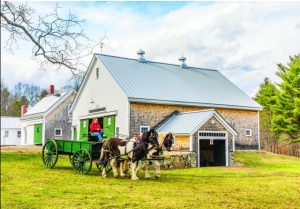 As the Townes expanded the farm, they followed the changing timber framing styles of the time. Today, the buildings at ifarm are snapshots showing a stylistic timeline of different timber framing techniques. Click here to see our restoration process.

In 1865, The Civil War was ending and America was entering the New Industrial Age. The same year, the Towne farm entered a new phase when it passed to John Towne’s great-grandson, Hiram Towne. Hiram saw the immense opportunity of the Industrial Age, as the country healed from the destruction of war and entered a period of economic expansion. Railroads were raising steam around the nation and individuals were pushing west. Lumber was in high demand and Hiram leapt to supply it. Much of the Towne farm was wooded with pristine timber that helped Hiram to become a successful timber wholesaler. He was the first in three generations to diverge from farming as his principal source of income. 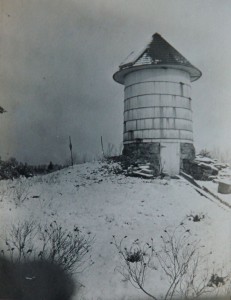 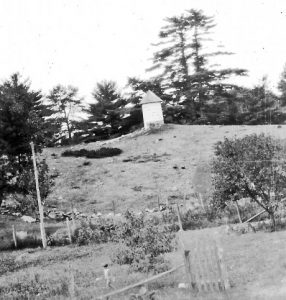 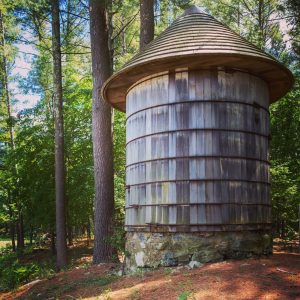 At the time of Hiram’s death in 1932, the farm property had increased to nearly 220 acres of land, as well as numerous tracts around Essex County. Although Hiram’s principal focus was in the lumber industry, he continued to maintain an active farm, and he even increased the amount of livestock.

At Hiram’s death in 1932, his property passed to his brother-in-law, Robert Parkhurst. Two years later, the farm complex, along with about 218 acres of land, was sold out of the family. The Towne family had owned and worked the farm for more than 150 years (1777-1934).

At The Height of the American Dream

The Towne family is an excellent example of the heyday of small family farmers in America. They lived in a time of economic expansion when raw materials sold for heady profits. Simple laborers were often able to acquire land and make their mark with axe and plow. The Townes were able to save and grow generation by generation. The gains were small at first, a few acres here, a barn there, but over time it began to accumulate.

When enormous expansion and opportunity followed the Civil War, Hiram Towne was ready and able to capitalize on the timber market and truly profit. It was this kind of generational gain that formed the heart of the American Dream, the idea that anyone can make a place in the world if they work hard and seize opportunity. The ifarm property is a standing testament to the agricultural history of New England from the Revolutionary War onwards. 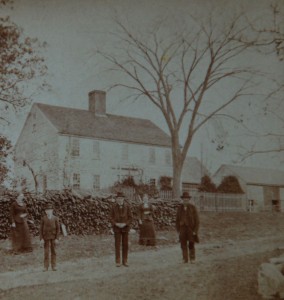 Henry A. Towne, with his wife and family, standing on Towne Road, circa 1850.

The farm continued to change hands through the years. Eventually, the buildings were purchased, as well as 106 acres of land south of the farm, by Richard & Jean Price in 1962. Development never occurred on this parcel; instead, about 89 acres were sold to the Essex County Greenbelt in 2001 and preserved as conservation land. In 2009 the Prices’ sold the farm, with the buildings and approximately 17 acres of land, to Christine Barensfeld. In 2012, ifarm was inducted into the National Registry of Historic Places by the Massachusetts Historical Commission.

Today, ifarm LLC curates over 230 years of historical legacy. It is our hope that each visit to ifarm opens a window into the lives of the people that have lived on this land before us. These stories of the past help us to remember what is truly important; tangible relationships with our fellow humans, our food, and the natural world around us. 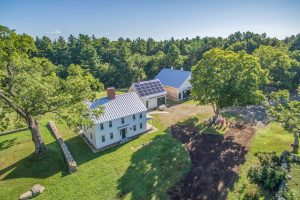 Generations of family connected to the earth.

The images below give us a glimpse of life on the Towne family farm.